Wicked for You by Shayla Black Promo Tour

About Wicked for You

Another "searingly sexy"* romance awaits in the latest Wicked Lovers novel from the New York Times bestselling author of His to Take.

Ever since he rescued her from a dangerous kidnapper, Mystery Mullins has wanted Axel Dillon. When he returned her to her Hollywood father and tabloid life, she was grateful…and a little in love. Mystery wasn’t ready to let Axel go, even after the soldier gently turned her away because, at nineteen, she was too young.

Now, six years later, Mystery is grown, with a flourishing career and a full life—but she’s still stuck on Axel. Disguised, she propositions him in a bar, and the night they spend together is beyond her wildest dreams. Mystery steels herself to walk away—except the sheets are barely cold when her past comes back to haunt her.

Once he realizes Mystery isn’t the stranger he thought, Axel is incensed and intrigued. But when it’s clear she’s in danger, he doesn’t hesitate to become her protector—and her lover—again. And as the two uncover a secret someone is willing to kill for, Axel is determined to claim Mystery’s heart before a murderer silences her for good.


Mystery blinked up, looking into his eyes. His expression, so sharp and aware, made her catch her breath. She dropped her gaze to his lips, aching to know what they felt like.
He grabbed a fistful of her hair and tugged, his stare sliding over her, fused to her. Then his lips crashed down onto her own. She gave a cry at the impact.
Axel took her mouth, possessed it. God, she’d been kissed before but not by anyone who could make her feel his touch through her entire body. The drugging relief she’d been feeling just after the crash mixed with a pure sexual thrill to give her a zing that soon had her climbing his big body, wrapping her legs around his waist, desperate for more.
Axel lifted his head, panted harshly in her face, then swooped in for another blistering kiss. This time, he drilled his tongue into her mouth and tangled it with his own, sweeping deep, scorching her all the way to her soul. His addictive flavor filled her. It wasn’t like artificial breath spray or toothpaste. It wasn’t whatever he’d been eating or drinking. It was just him. She tightened her legs around him and struggled for her next breath, not really caring if she found it.
He pulled at her scalp as he slanted his mouth across her lips at another angle, then dived deep into her a third time. Aching for him everywhere, Mystery wriggled on him and . . . Oh, did she find him hard and ready and so big. Yes. She wanted that. She wanted him. She yearned for more of his fingers tangled in her hair, his kiss taking absolute command of her body, to find out what it felt like to be filled by a guy who wasn’t simply trying to score.
She whimpered and tightened her arms around his neck. He gave a groan as he filled his hands with her ass and ground her against his raging erection.
He hit her right against the most sensitive spot. Mystery couldn’t stop herself from breaking the kiss and tossing her head back in pleasure. “Axel . . .” 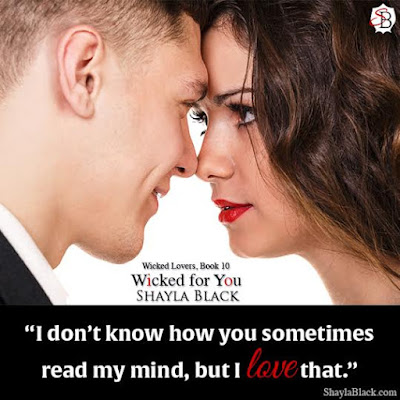 “Now what are you going to do, big man?”
For a long moment, he did nothing but stare at her as if she’d made some grievous error she would come to deeply regret. Slowly, he uncrossed his arms, then sighed, sizing her up like an animal considering its prey, waiting for the perfect moment to pounce.
Her heart pounded. Her nipples beaded. Her whole body lit up. Not once had any of the admittedly stupid string of boyfriends she’d had made her feel this much like a woman. Her breathing speeded up. She swayed a bit closer. Would he touch her? Would he lay his lips over hers and claim her mouth before he delved into her body?
She exhaled a ragged little sigh. “Axel . . .”
Her whispered entreaty put him in motion. His eyes went dark as he skirted the bar, sidled closer—and kept coming at her.
A dizzying wave of desire swept through her as he reached for her. His fingers brushed her waist. She swayed. Her back hit the wall. She gasped. He pinned her with his big body, his hands braced on either side of her head. Heat seeped into her. His erection pressed hard and massive into her belly. She closed her eyes, her head falling back as she offered him her vulnerable throat.
“Princess . . .” he murmured low and soft in her ear.
Her entire body trembled. “Yes.”
When he didn’t say anything right away, she opened her eyes to find him staring at her. He hovered right over her, his face so close. Lust ripped across his expression, darkening his eyes, firming his lips. She couldn’t wait to feel him . . .
“Yes.” Mystery positioned her lips just under his. 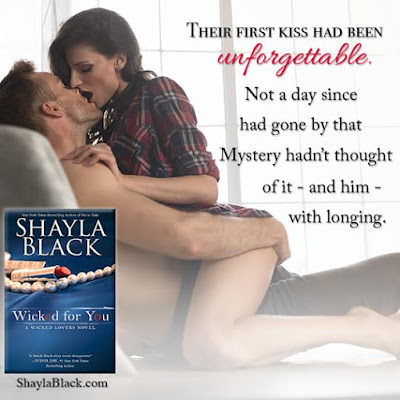 
Shayla Black is the New York Times and USA Today bestselling author of more than forty novels. For over fifteen years, she’s written contemporary, erotic, paranormal, and historical romances via traditional, independent, foreign, and audio publishers. Her books have sold well over a million copies and been published in a dozen languages. Raised an only child, Shayla occupied herself with lots of daydreaming, much to the chagrin of her teachers. In college, she found her love for reading and realized that she could have a career publishing the stories spinning in her imagination. Though she graduated with a degree in Marketing/Advertising and embarked on a stint in corporate America to pay the bills, her heart has always been with her characters. She’s thrilled that she’s been living her dream as a full-time author for the past seven years. Shayla currently lives in North Texas with her wonderfully supportive husband, her teenage daughter, and a very spoiled cat. In her “free” time, she enjoys reality TV, reading, and listening to an eclectic blend of music. 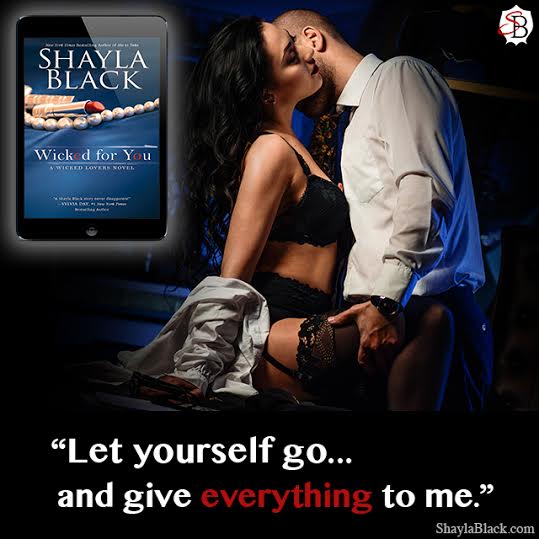 Posted by Friend till the end book blog at 1:22 AM