The Fix Up By Tawna Fenske Release Blitz 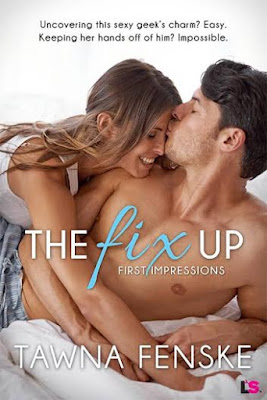 Uncovering this sexy geek’s charm is easy. Keeping her hands off of him is impossible.

While he may look like the love child of a movie starlet and an NFL linebacker, Ben Langley has the people skills of a half-drowned porcupine. Why socialize when there are chemistry labs and bad sci-fi flicks? If he has any hope of taking the helm as CEO of the family business, Ben needs an image makeover. Pronto.

Enter Holly Colvin, owner of First Impressions public relations and branding firm, and the woman who just saved Ben from the clutches of an over-attentive sales clerk. Holly’s rebranded hundreds of companies in her career, but she’s never rebranded a person. The guy clearly needs help, though, and she’s just the woman for the job.

With the clock ticking for them both, Holly and Ben face off over wardrobe malfunctions and business jargon that sounds a lot sexier than it should. But can Holly make Ben into the man he thinks he should be without losing the man she’s starting to love?

“Uh, Holly?”
The sound of Ben’s voice from the dressing room stall jarred her from her incessant planning.
“Yes?”
“I’m having a bit of a problem here.”
“What sort of problem?” She stood up, ready to help. “What’s wrong?”
“There’s a thread or something caught in the zipper. I can’t get the pants off.”
She hesitated, resting a hand on the wall of the dressing room. “Do you want me to help?”
“You know, this really isn’t how I envisioned you offering to remove my pants.”
She felt the heat creeping into her cheeks again, torn between the embarrassment of the situation and the thrill of knowing he’d basically just admitted he’d thought about her taking off his pants.

It was a joke. Don’t get too excited.

“Should I go find Marcus?”
“Who’s Marcus?”
“The clerk. That’s what his nametag said, anyway.”
“I should pay more attention to stuff like that.”
“There’s your first lesson in public relations—always look for nametags.” She lowered her voice a little and glanced toward the door. “And based on the attention Marcus was paying to you, I get the sense he wouldn’t mind taking off your pants. What is it with you and sales clerks?”
Ben muttered something unintelligible that was probably some sort of engineering curse. “I’m about five seconds from whipping out my pocket knife and cutting the damn things off my body.”
“Don’t do that! They’re the only pair in your size and they don’t even need to be tailored.”
“I’ve been at this for ten minutes already.”
“Are you sure you’re sliding it the right way?”
“I have a doctorate in engineering,” he muttered. “I’m pretty sure I understand how a zipper works.”


She hesitated at the edge of the dressing room, biting her lip. “Do you want me to try?”

Tawna Fenske is a romantic comedy author who writes humorous fiction, risqué romance, and heartwarming love stories with a quirky twist. Her offbeat brand of romance has been praised by Booklist as “A tame Carl Hiaasen on cupid juice,” and RT Book Reviews nominated her debut novel for contemporary romance of the year. Tawna is a fourth generation Oregonian who can peel a banana with her toes and who loses an average of 20 pairs of eyeglasses per year. She lives in Bend, Oregon with her husband, step kids, and a menagerie of ill-behaved pets.