She can forgive, but can she forget?

Some days, Everly still thinks she sees him. In the food court at the mall, or in a car speeding past as the light changes. It only lasts a second, but when it happens, she slips back to a time when she was ruled-and nearly ruined-by August Kincaid. And it doesn't matter that she's moved on, that she's about to marry another man. In those moments the only thing she can do to regain control is take a deep breath and remind herself that August can't hurt her-because he's in a coma. Except that he's not anymore.

August is awake. With no memories, he sets out to solve the mystery of his lost life. He unearths a photograph of a beautiful redhead named Everly and knows instinctively that she's the key. But when he finds her, the August she describes is more monster than man.

Tortured by the thought of having hurt her, August wants only to become the man Everly deserves. As the new August emerges, Everly glimpses the person she first fell in love with. But can she trust that this August is real? When the final secret of their shared past is revealed, one of them will make a choice that changes their future forever . . .

Add it to Goodreads here! 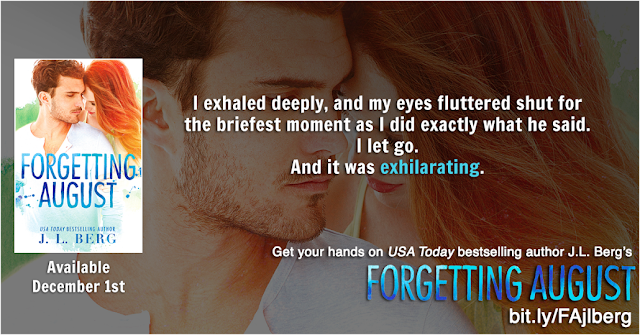 “Plans change—for better, for worse. We adapt. And all that matters is what’s in front of us.”

“And you have Ryan now,” I concluded.

Silence followed us as we moved down the street past the old clubs and the dingy storefronts.

“Why do you want to know about the past—about us—so badly?” she blurted out as we reached my car. I turned to face her, and saw red blotches of anger tinting her face. I took a second or two to collect my thoughts before responding.

“Have you ever watched a mystery or a thriller type movie?”

“You know, like Inception or Gone Girl? Where you just have no fucking clue what’s going on until the very end?”

“I know what type of movie you’re talking about. And no—not really, if you must know. I’m not a mystery lover—I always see the plot twists from a mile away. But what I don’t see is why you’re bringing up movies—right now!” she huffed.

“I’m trying to explain my answer. Would you just give me a second,” I answered gruffly.
She threw her arms across her chest, and I tried to ignore the way they pressed her breasts high and tight against her shirt. I decided to look at the stop sign across the street instead.
That was safer.

“Anyway, as I was saying—I’ve been watching a lot of movies lately—in an effort to discover the new me. Well, I’ve decided I hate thrillers and mysteries. The intense feeling of never knowing what is going on—that sick, twist-in-the-gut feeling of knowing there is something missing and you just don’t know what it is. I hate it—with a passion. That’s my life— all that damn time. Knowing there are clues and memories out there, within reach, but having no idea how to get to them.”

“Why do you need to know so badly? I mean, couldn’t you just start over new?” she asked softly.

“I tried. I am trying, but I’m always pulled back to this dark black hole of nothingness. I need to fill in the blanks. I need to make sure I don’t...”

“You don’t what?” she pressed.

“I don’t want to become that man again,” I confessed, turning toward her. Her hesitant eyes met mine, and she nodded.

“Then we keep going. One memory at a time.”

No smile of encouragement, no friendly good-bye as she turned toward her car, but she had given me the promise of more.

More time with her.

More memories of us, and more chances to change her mind.

She might never love me again, but maybe she’d find it in her heart to forgive the man I was trying to become. 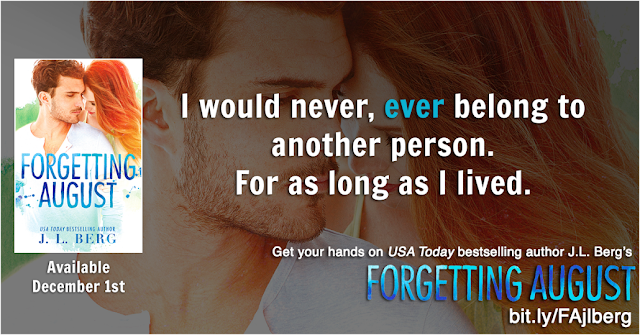 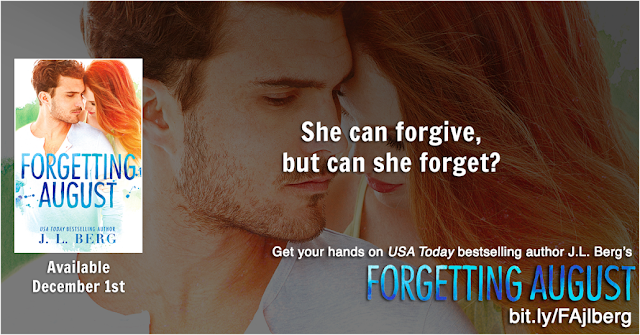 We're OBSESSED with this trailer for FORGETTING AUGUST!

Join us for the FORGETTING AUGUST Release Party!

Forever Romance and J.L. Berg invite readers to join them for a Facebook party on December 9 from 7 – 10 PM EST to celebrate FORGETTING AUGUST, on sale December 1. In addition to fun guests and giveaways, there will be a great discussion about the book as J.L. Berg takes fan questions. RSVP here. 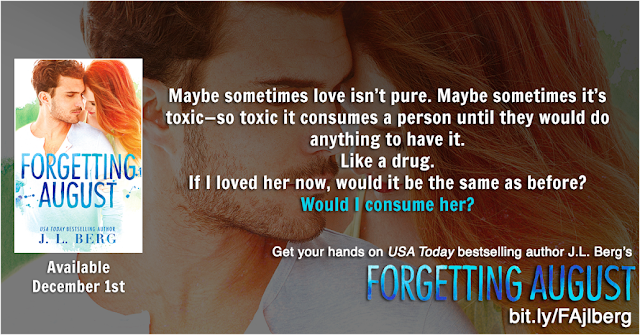 Author J.L. Berg is a California native living in the South. She is the author of the self-pubbed Ready series, which has sold over 100,000 copies. Married to her high school sweetheart. She and her husband have two beautiful girls that drive them batty on a daily basis. When she's not writing, you can find her with her nose stuck in a romance book, in a yoga studio or devouring anything chocolate.

Posted by Friend till the end book blog at 7:56 AM