Dangerously Yours Synopsis
The Caribbean: home to crystalline beaches, scorching passions, and a twisted power hell-bent on destruction. DANGEROUSLY YOURS is a sizzling paranormal romance in which love is not the only force of nature…

Whales don’t just vanish from the ocean, but marine biologist Lex Durand saw one do just that. With years of research at stake and driven by the imperatives of her telepathic bloodline, she seeks the help of scientist-in-hiding Bodie Flynn—a man with little regard for others, and even less regard for Lex’s wealthy and secretive family. But while Lex was warned Bodie would be difficult, she never expects to find he has psychic abilities equal to her own.

Bodie despises being trapped in Durand Tech’s version of the witness protection program, and when a gorgeous, whip-smart Durand heiress lands on his beach asking for help, he’s unhappier still. The last person he wants in his life is the sister of the man who ruined him, but the disappearance of Lex’s whales could be related to the bizarre energy shifts he’s been studying in the Caribbean. He doesn’t trust Lex, but he needs her data, and isn’t above using her to get it.

As the dangerous force behind the changing seas becomes deadly, Lex and Bodie must put aside their personal agendas to track down a powerful foe. But when their attraction reaches a boiling point, facing their feelings may prove the hardest battle yet.

The Talos IV glided to the far side of the barge and Bodie hurried to the bow to hook the mooring line. In a smooth motion he flipped the line over a cleat, bringing the boat to a stop. With the grace of a dancer he moved along the starboard deck securing lines and positioning bumpers to prevent the barge from damaging the lighter vessel.

Lex watched him work, admiring the play of muscle stretching the gray t-shirt across his broad back and shoulders. Everything about the man was blatantly physical, from his striking good looks to his athlete’s body. Not that any of that affected her. She was here for one reason—her brother had called Bodie a genius, and she desperately needed his help to find out what happened to her whales. But, damn, the package that genius came in was hard to ignore.

“Would you throw me a line?” she called to him as she floated up to the barge.

Five minutes later she stood on the deck inspecting black patches that looked suspiciously like small solar panels. “Why all the camo?” she asked.

He ignored her question. “What did you do to the Obeah woman?”

He straightened, leaned against the wall of the cabin and surveyed her skeptically. “What trade would that be, the wicked witch’s guild?”

“Why did she haul ass when you gave her the evil eye?”

Like she was going to explain that. “I’ll make you a deal. You give me a tour of your barge and I’ll tell you.”

“Come on, Bodie. What’re you hiding? I’ve seen messy bachelor pads before.” She reached for the handle of the cabin door.

His hand shot out and caught her wrist before she could turn it.

The strength of his calloused grip on her arm sent a thrill of electricity through her and her senses went on high alert.

“I said no,” he growled. “Antagonizing strange men can get you in a lot of trouble.”

“Not a problem. After all I’m big and bossy—isn’t that right?”

His hold on her relaxed and his thumb brushed the sensitive inside of her wrist. “I’m much bigger.”

And she was highly trained in hand-to-hand combat. Still, she’d never fought an opponent his size. Not that his tone suggested he was looking for a fight. On the contrary, and her traitorous body was totally on board. 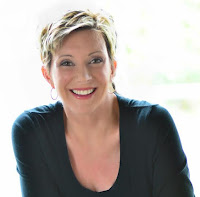 Lark Brennan's love of reading, writing and travel has led to a string of colorful jobs and a well-worn passport – including a few years spent sailing and diving in the Virgin Islands (the setting of her first novel). She now works in marketing and public relations by day and writes romances set in exotic places by night. Lark dreams of one day moving to Paris, and in the meantime lives in Texas with her brilliant husband and two adorable canine “children.”
Links
https://www.facebook.com/LarkBrennan/?fref=ts
https://twitter.com/larkh
http://www.larkbrennan.com/
https://www.goodreads.com/author/show/14473204.Lark_Brennan

Posted by Friend till the end book blog at 12:22 AM