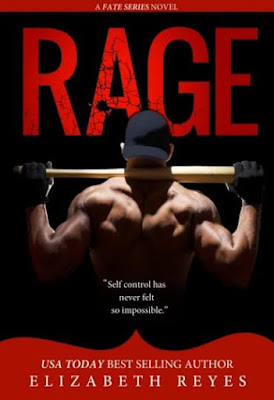 
Having made it to the major leagues, AJ "Rage" Romero is determined to shake the stigma his temper has earned him over the years. He's finally managed a shaky hold of that elusive self-control.


Without warning, his coach and mentor's brilliantly gifted granddaughter Clair and her equally amazing mother Addison Lara blow into AJ's life. The harder he falls for Addison, the closer and more attached he becomes to Clair.


Having fallen so fast and hard, he agrees to respect the understandably protective single mother's wish to forever keep the identity of Clair's absent father unknown to everyone—including AJ.


But when the ugly truth about Clair's dad begins to surface, the fire in AJ's fiercely possessive heart is lit. As more of the troubling reality comes to light, his zero tolerance for secrets and dishonesty put his temper—and his love for Addison—to the ultimate test.


Self-control has never felt so impossible.

“So I guess that Jet Ski the coach bought Clair is his way of trying to make sure you and Clair stay in California,” AJ said with a smirk. “He mentioned when you two first moved back you weren’t entirely sure about making it a permanent move.”
Addison smiled, annoyed that, despite having managed to calm her heart considerably, she was still so easily caught up in his gaze. She nodded. “Yes, I told them that in case I changed my mind. Technically, if I ever want to, I can always transfer back.”
“Any particular reason why you moved so far away from your parents in the first place?”
Glancing away from his inquisitive eyes, Addison gulped in an effort to think of how best to answer that. “Not really,” she said as he watched her intently. “I just got offered the position out there and it was a good one. I’ve never liked my parents thinking just because I was so young when I had Clair that she was their responsibility.”
AJ was doing what he’d done so often all day. He had this way of staring at her, so acutely concentrating. She’d observed it even on television when she watched him play. But she’d always thought it was just his game face. No one could be that intense all that time. Right? Yet, here he was doing it again, and it made her strangely nervous. She swiped at a strand of hair as she glanced away from him before she continued.
“I made my bed, and I was determined to be the one to lie in it. Not them. They helped me enough by watching her while I finished college. Once I did and had a good enough job where I could afford to support us without their help, I wanted to.”
“Well, I’ve known others who’ve become single parents unexpectedly. Sounds to me like you’re doing better than most. Clair’s proof of that.” He smiled, finally easing the intensity in his eyes a bit. “I’ve never met such an amazing kid. You should be proud.”
“I am”—she smiled big—“very proud. She’s the precious center of my world.”
“Coach said he’s never met her dad,” AJ said, noticeably glancing away when she lifted her brow.
One thing Addison knew for a fact was that her father created very strong bonds with his apprentices. So it didn’t really surprise her that he might’ve shared some of the more personal stuff about her and Clair. What did surprise her was that AJ would see fit to ask her about it after spending just one day with them. This wasn’t just personal; it was one of the most private things in her life, and she intended to keep it that way.
“No, he hasn’t,” she said, turning back to the gift store, suddenly wondering what was taking them so long. “He’s never been a part of Clair’s life, so we never talk about him.”
“Guy doesn’t know what he’s missing out on,” he said as his expression hardened a little.
Instinctively, the words nearly jumped out of her mouth. You’re right. He doesn’t and he never will. He doesn’t deserve to. But it was too damn personal and she hardly knew AJ. Just because he didn’t seem to hold back whatever he was thinking or wondering about didn’t mean she’d be doing the same.
“Yeah, well, she’s been fine since day one without him.”


“Sorry if I touched a nerve there,” he said as she turned and their eyes met again. “I didn’t mean to. I just wanted to mention how inspiring I think it is that, not only did you earn such an impressive degree in something I can’t even pronounce while raising such a brilliant kid, you’d done so on your own. That’s all.”

Award winning, USA Today Bestselling Author, Elizabeth Reyes continues to answer her calling on a daily basis. Since releasing her debut novel FOREVER MINE (MORENO BROTHERS #1) in 2010 she has since published seven more in that series, FOREVER YOURS, SWEET SOFIE, WHEN YOU WERE MINE, ALWAYS BEEN MINE, ROMERO, MAKING YOU MINE, and TANGLED with more stories about the Moreno family and their friends to come. She's also published a second series, 5th Street which includes, NOAH, GIO, HECTOR, ABEL. FELIX. Her Moreno Brother's spinoff series FATE includes FATE, BREAKING BRANDON, SUSPICIOUS MINDS and AGAIN (Sydney's story). Her debut traditionally published title is DESERT HEAT and her latest release is her first ever three part romance serial DEFINING LOVE.

When she's not writing (which is rare) she spends as much time as she can with her husband of almost twenty-one years, two young adult children, her Great Dane, Dexter and big fat lazy cat named Tyson.