Today we have the release blitz of Hearts Unleashed by Paris Wynters!

Be sure to grab your copy today! 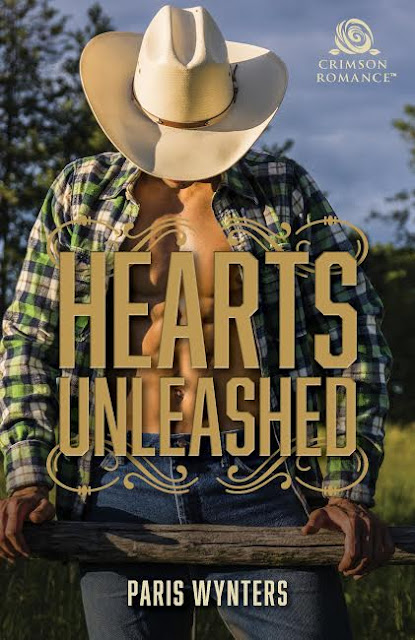 After an IED ends his military career, Major John Rathborne struggles to re-adjust to civilian life. Haunted by the death of his brother-in-arms, John’s determined to find his canine partner, Koda, now retired and re-homed. The last place he expects to find her is on a ranch in Absarokee, Montana, where he lands a foreman job and a chance at a new start.

Unfortunately, ranch manager Katie Locke just wants the new guy gone. She can’t shake the trauma from the night she was attacked, and God knows she doesn’t need some stranger invading her safe haven. She can’t ignore John’s brooding presence, and even her dog shares an uncanny bond with him. But when her father suffers a heart attack, Katie has no option but to put her differences with John aside to save the future of Three Keys Ranch.

As they slowly find a common bond and their attraction heats up, both realize they must heal from their past wounds if they want to explore a relationship. But John hasn’t told Katie about certain parts of his past—including that he and Koda had been partners in Afghanistan. Then he learns someone is out to destroy the ranch, and Katie is in their crosshairs. Has John opened his heart too late?


Get Your Copy Today

After their last mission, he and Koda had been unceremoniously dumped from the military. He’d wanted to adopt her, but by the time he’d taken care of the red tape surrounding his return to civilian life, she was gone, assigned to a civilian family.

He undid his belt, leaning back in the driver’s seat as a wave of exhaustion hit him. He’d been holding out for this day ever since he’d left the hospital. Ever since Fort Bragg messed up and adopted Koda out to a civilian family. Handlers always have first rights. Unable to trace her adoptive family through his military ties, he hadn’t given up. He’d turned to social media in an attempt to find his indispensable K9 partner. John closed his eyes, picturing the image he’d plugged into Facebook of him and Koda together. She lolled on the roof of a Humvee, tongue hanging to the side of her mouth as if she was grinning. He leaned up against the vehicle right next to her—the same vehicle that was destroyed by a cheaply made Improvised Explosive Device just a few weeks later.

He knew his chances were slim. His therapy sessions over the last three months revolved around his ability to handle never finding her. And after nine months of searching, he’d come close to losing hope. Until today.

Shutting his eyes, he replayed the moment when she bounded up to him, and he knew—knew she hadn’t forgotten him any more than he could forget her. He felt her rough tongue scrape his cheek and laughed.

I finally found her.

But he could still lose her. He winced, remembering that the Lockes were her legal owners now. And while Mitch was a nice guy—maybe even a little too nice—his daughter was another story altogether.

His mouth soured. Katie might look delicate, but her sidelong glances had been sharp as nails. She’d sized him up pretty quickly. He could make no mistakes around her—not if he wanted to be near Koda. It was clear from her outburst that his former partner was much more to her than a ranch dog. There was no way she’d give Koda up without a fight. Hell, she’d probably even fire him to keep him away from the dog.

He shifted in his seat. He needed this job. Thinking of Katie brought up a spark of annoyance. Her possessiveness irritated him, even if she didn’t know Koda was far more than just a dog to him. He could not see her taking the news that Koda was his canine partner well at all—hell, she’d barely tolerated him standing in their barn. Still, I know Koda’s safe and happy—and working at the ranch, I’ll see her every day. It was enough—for now.

Like hail on a glass pane, the drumming of his fingers was as relentless as it was loud, trying to still his mind. Each thump on the dashboard echoed the tumultuous thudding of his heartbeat. He couldn’t shake off her words—or her soft, inviting lips.

I'm a hopeless romantic and a lover of all things coffee, canine, and exercise. When I'm not writing, I'm at the hockey rink cheering on my son, playing HALO on Xbox, or breaking a sweat in the gym. live in New York with my family and my two lovable and psychotic working dogs. I also run numerous 5k races in the New York area that raise funds to support the military/veteran community.