Blog Tour: His by Brenda Rothert 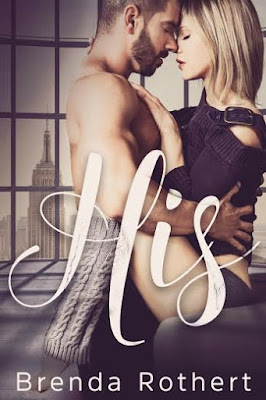 
Quinn
I’d say I’m down on my luck, but that’s an understatement. I’m flat on my ass. Homeless, hungry and in hiding with my little sister at the age of twenty-one, I’ve never been so desperate. I’ve hit rock bottom when I get an offer I can’t refuse. Sell my body to save my sister? There’s nothing I won’t do to keep her safe. I make the rules and I’m not afraid to defend myself if this rich guy crosses the line. But once I see beneath his cold, calculating façade, the lines aren’t so clear anymore.

Andrew
She’s an intoxicating mix of tough and vulnerable I’ve never known before. This homeless woman who fits right into my upper-class world is running from someone powerful, and I’ll do whatever it takes to protect her. But Quinn isn’t meant to be controlled, so I’m forced to choose between owning her and loving her. I’ve finally met my match, and I’ll do whatever it takes to make her truly mine.

There’s nothing good in Mauricio’s Dumpster tonight. Hard pieces of uneaten pizza crust and cold spaghetti covered in olive oil are the only edible things I’ve found so far. And it won’t get better if I dig further. So why am I still ripping open bags of trash on this cold fall evening?

Because my little sister is hungry. I can still see the hope that was shining in her huge blue eyes when I left for a food run earlier. If we’ve learned only one thing in our four years on the streets of New York City, it’s that hunger and cold are realities, but facing them at the same time is a bitch.

I climb up a pile of trash heaped at the end of the rusted Dumpster, bracing my foot on a stack of empty pizza boxes. My hair whips across my face when the chilly breeze catches it.

Fall is my least favorite season now. I loved it when I was a kid and it meant hot, spicy cider, piles of crunchy leaves to plow through, and football games to cheer at.

But now, fall means the dreaded, bitter winter is on its way. I’ll spend my days taking Bethy from one heated public place to another in an effort to stay warm. At night, we’ll sleep underground. The cold down there isn’t life threatening, but some of the people are.

I’m so tired. It hits me all at once, and I sag against a filled plastic trash bag. Last night we got kicked out of the park and chased by a group of frat boys threatening to gang rape Bethy and me. If there hadn’t been nine of them, my friend Bean and I would’ve wiped the cocky grins off their faces.

Fucking rich boys. Their sense of entitlement is staggering.

I sigh and crawl back down the trash hill. The wail of a siren approaches as I fish a plastic bag out of my pocket and stuff the cold spaghetti noodles into it.

Its food, and Bethy won’t complain. We’ve both eaten worse to stave off hunger pangs.

I close my eyes, pushing down the wave of anger welling inside me. The fatigue won’t go away if I sleep well tonight. It’s bone-deep. I’m tired of running. Tired of feeding my sister scraps of food other people threw away. Tired of wondering if the hell I saved her from is worse than the one I brought her into.

Thinking about this will drain me. I force the thoughts away, wrap my hands around the edge of the Dumpster and swing my leg over.

Two more years. That’s what I focus on instead. In a little over two years, Bethy will turn eighteen and we can have a real life. I’ll get a job, and she’ll go back to school. We’ll stop running and looking over our shoulders constantly. We won’t go to bed hungry or cold ever again. I’ll make sure of it.

Brenda Rothert is an Illinois native who was a print journalist for nine years. She made the jump from fact to fiction in 2013 and never looked back. From new adult to steamy contemporary romance, Brenda creates fresh characters in every story she tells. She’s a lover of Diet Coke, chocolate, lazy weekends and happily ever afters.