Betting On It by Violet Blake Blog Tour 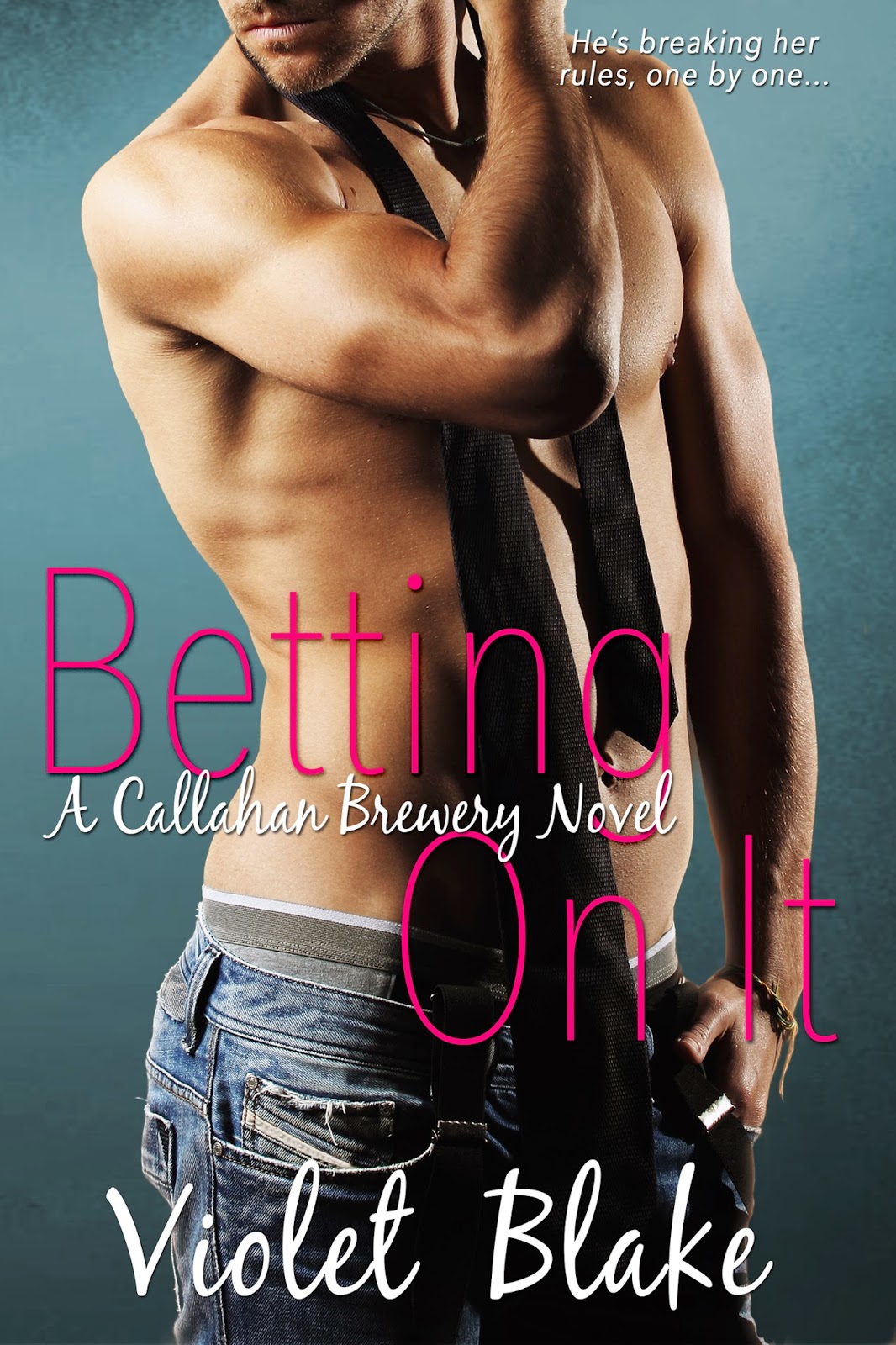 Betting on It Goodreads

Synopsis
Recent college grad Blair Bartlett thought she had it all—until one near-death experience destroyed everything. Now she’s starting over halfway across the country with zero confidence, zero trust, and zero in the bank.

But as the weeks tick by, Blair knows the friendship has become much more than she’s bargained for. And something dark in Sawyer’s past is threatening to ruin their future before it even had a chance.
Buy Links
Amazon | Kobo | iBooks | B&N

He led me up the steps, and Baxter plodded up behind us. Sawyer’s fingers clasped mine, and I couldn’t help but notice how warm his skin felt. Or the little spark of pleasure that zinged from my hand straight to my belly.
Geez. Next thing I knew I’d be using that card to call Pete. Anything to get my mind off Sawyer.
After a quick mental whack upside the head, I gathered my wits and focused on the architecture. I knew nothing about it, but at least studying bricks and the artwork on Sawyer’s walls would give my mind a much-needed vacation from imagining him naked. I mean, really. What chance did I have with a guy like him, who had everything in his life together? I didn’t even have a drivers license at the moment.
He led me to his kitchen, which overlooked Old Town. Decked out in every modern and drool-worthy appliance known to man, it, too, was encased in brick, stainless steel, and a gorgeous blend of modern and industrial.
“Blair?”
I had stopped walking, and my mouth was hanging open. I shut my mouth and smiled. “Just admiring all the kitchen porn.”
“Kitchen porn?”
“I have a thing for kitchens. And food. What can I say?” Hopefully I wouldn’t say how much I was looking forward to the item on my list that would involve unholy amounts of chocolate and other edible items. Because nothing would make my night better than sticking my foot in my cakehole.
He let go of my hand and walked to the fridge. “I couldn’t cook to save my life. Let’s get you some electrolytes. After a night like this, you’re going to crash hard. Tomorrow will be pretty painful.” He motioned to one of the barstools at the counter that wrapped around the massive island. “Have a seat.”
I sat. Normally, this was where I’d feel awkward and would try to distract myself with my cell phone. Lucky for me, I could make do with a couple of options:
One, conversation. I didn’t trust myself not to say anything that wouldn’t humiliate me, head injury or no. And if this morning at the restaurant was any indication, verbal diarrhea was kind of my MO.
Two, I could pretend to admire the paintings and architecture.
And the third option? Staring at his butt while he rummaged the fridge.
Sold.
He really did have a great one, not to mention a great everything. When he turned back toward me, I snapped to attention, being sure to keep my eyes on more appropriate body parts. So much for keeping it safe.
“What would you like to drink?”
“Do you have tea?”
“I’m not much of a tea person, but I have…” He disappeared into the fridge again and scanned the shelves. “Beer, cranberry juice, a half-bottle of cabernet, and Gatorade.”
“Gatorade it is,” I said.
Baxter laid on the kitchen floor next to Sawyer, who poured a dark beer for himself, and slid a bottle of red Gatorade across the counter for me. “Drink up.”
I unscrewed the lid and enjoyed the show. He unbuttoned his sleeves and rolled them up to his elbows, revealing a tanned, muscular set of arms.
Down, girl.
I mentally rolled my eyes and took a drink.
Once he’d finished the plate, he and I sat on the couch and shared the snacks he’d fixed of various cheeses, crackers, meat, and…
“Skittles?” I asked, holding up a lime green one.
His shoulder rose in a half-shrug. “I like Skittles.”
I watched him toss one into the air and catch it in his mouth. “I’d give it an eight.”
“Eight? That’s it? Did you see the air on that? And I actually caught it, which deserves a nine at the last.”
“Yeah, but it’s yellow, so it’s easy to see in a dark room. If you catch a purple one I’ll really be impressed.”
He shook his head and practiced his technique while I munched on the food he’d made. He went through each color, progressing from lightest to darkest, catching fewer than half. When he’d reached the purples, he handed them to me. “Three chances.”
“You’d better use them wisely,” I said.
He opened his mouth, and I aimed for his tongue. The first attempt hit him in the forehead. He picked it up off the cushion and ate it.
“Nice try,” I said.
“You did that on purpose.”
“Don’t give me that much credit. I hold the world record for least baskets made in office trashketball.”
“We’ll have to work on your aim.”
“You first. Okay, both hands behind your back this time.”
He put his hands behind his back.
Taking a few practice aims, I focused on his lips. Which led to all sorts of thoughts, which killed my concentration, which led to me taking a short shot. Sawyer dove for it, falling forward.
Right on to me.
Take that, chaste thoughts.
He didn’t move. Both of us stared at each other, seemingly frozen. His heavy, hot body covered mine, and I inhaled the scent of grape Skittles.
“Caught it,” he said, his voice lower and huskier than ten seconds ago. He stuck out his tongue to show me the Skittle.
Sweet lovin’. I wanted that tongue all over me. I’d even hot glue gun Skittles on every square inch of my skin if that’s what I had to do.
Our eyes had locked and his pupils expanded, pretty much squeezing out the color of his irises. His skin reddened, and his lips parted. Hot puffs of his breath teased my collarbone, which only made me want more.
If I’d thought my body was hot before, this was downright nuclear. The way he was watching me, I knew for a moment he’d forgotten I was in the forbidden friend zone.
He inched closer. “Blair?” he whispered, his voice clearly asking for permission. For what? Who fucking cared? He had carte blanche.

About Violet Blake
Violet grew up wanting to be many great things. However, she quickly found out she was too accident-prone to be an astronaut, veterinarian, or surgical nurse, and had to take some time off from college to formulate a Plan B. By the time she got to Plan X, she settled on a degree in public health. But while she was supposed to be studying for a pathophysiology test, she took up writing romance.
Career commitment issues aside, she is fiercely dedicated to her family, and those who are patient enough to overlook a few...quirks. And no, she's not going to swap writing (Plan Z, if you're keeping track) in for a new career any time soon. She's run out of letters, for one. Violet loves to write contemporary and fantasy, and one day hopes to get up the nerve to dive into futuristic.
Website | Twitter | Facebook | Goodreads

Posted by Friend till the end book blog at 9:18 AM