Today we are taking part in the blog tour for DILF DIARIES: OH BABY by Stephanie St. Klaire! This book kicks off a brand new series that you cannot miss! Enter the giveaway below to win a surprise book box, including a Kindle!

Sign up for Stephanie's newsletter for exclusive news and details about the series. 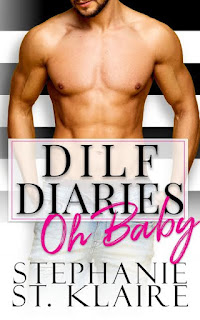 He likes to find them hot, and leave them wet…

Women are setting their lawns on fire and sticking cats in trees all so they can dial 911 and get a glimpse of Jack Decker’s…hose. When a firefighter looks like he does, it’s no wonder panties are melting, and hearts are ablaze all over the city because he is H-O-T…hot! Jack might put out fires like a regular hero, but it doesn’t stop him from heating up the sheets and letting them smolder.

In a burning twist of fate, Jack finds himself up all night long for an entirely new reason, a reason that’s anything but smoldering. That is until the feisty firecracker next door threatens to ignite a fire he doesn’t know how to battle…Oh Baby!

For a few more days only, enter the RELEASE GIVEAWAY for a chance to win a surprise book box filled with goodies -- including a Kindle! Though the underground sprinklers did a fine job watering the shrubs lining the property, Jules thought it couldn’t hurt to give them an extra watering. They’d had record breaking heat lately, and if she didn’t water them, she’d be replacing them. So, it was good for the environment too. As she moved down the fence line, closer to Jack’s, she leaned into the planks, trying to get a better view. There’s nothing wrong with giving a thorough watering, she told herself.

The tiny cracks between boards weren’t quite giving the view she needed, so she pushed on, until she found a knot hole in a board that allowed her a straight shot glimpse of Jack’s patio and pool area where they were all seated. The shrubs where she was standing seemed to be especially dry, so she leaned in to get a better look, but only because she needed to water the hell out of the surrounding greenery.

“Looking for me?” came a deep voice from behind her. “Or did you drop a contact?”

Jules jumped at the sound and gasped when she hosed herself in the face with the frigid water. “Oh my God, what the hell, Jack? You made me spray myself!”

“You’re the one eavesdropping in my yard,” he accused, an entertained look on his face.

Jaw dropped and thoroughly offended, she corrected, “I am doing no such thing. I’m watering the plants!”

“You mean watering the fence?” Jack pointed to the area where he caught her not so secretly gawking.

When Jules looked behind her and noticed the fence panel to the right of where she stood was indeed thoroughly watered, she decided the only way out of the hole she was digging was to dig a little deeper. “That’s because I’m…weeding too.”

She bent down and grabbed the first thing she could wrap her sturdy grip around and gave it a fierce, root-popping tug. “See?”

Amusement filled his expression. “You just pulled up a juniper.”

“Yeah…” Jules’ eyes widened when she looked at the shrub in her hand. In a quick recovery, she confidently fired back, “Well, I didn’t like it there. I think an azalea would look nicer.”

Crossing his arms, Jack bobbed his head as if he agreed, and looked behind her before replying, “Okay, but that’s my juniper. Your yard ended like ten feet that way.”

Shit. She followed the direction he was pointing only to gain a little time to come up with her rebuttal. She knew she was in his yard, and nowhere near her own, she just hadn’t thought of that ninety seconds earlier when she made the impromptu decision to rid his yard of a perfectly fine juniper. “Consider it a favor. This thing is dying, and…it’s ugly.”

She marched off, hose in hand, stomping in the now muddy flower bed that was somewhat of a property line between them. She paused when the mud splattered all over her. How much humiliation could a girl handle? When she heard the ear-piercing laughter coming from his direction, she marched on, mud splashing and all, but not before she turned around and placed her thumb over the hose nozzle, giving Jack a high pressure wetting of his own.

Jack sat on his back patio, enjoying a day off by the pool. It seemed his neighbor next door had the same idea. He heard her over the fence talking to someone about seeing them that evening and looking forward to dinner. Probably that kid doctor who wants in her pants so bad. Whatever, the guy’s a douchebag. She can do better.

After the last appointment he had with Ramsey and Dr. Dickhead, Jack was surprised the guy was still calling Jules and trying to date her. Jack wasn’t sure why, but he felt obligated to inform the good doctor about Jules and her revolving door of men. It seemed she was into younger guys — college dudes. At least, they appeared to be in college, and everyone knew if you’ve been with one frat boy, you’ve slept with the entire campus.

Sure, none of that was true, but Jack had zero fucks to give. If Jack wasn’t good enough for Nurse Jules, Dr. Dickwad definitely wasn’t. Pediatrician, whatever. I guess it could be worse, he could be a gyno just to meet women. The guy was a creep, and Jules would thank him someday for doing her a solid. He owed her one anyway.

Dickface might not have been good dating material for Jules, but he was a hell of a good kid doctor, and if it weren’t for Jules, he and Ramsey may not have met the guy. When the sound of Jules’ lawn mower stopped, he realized he’d been lost in thought long enough for her to do her backyard and move onto whatever else had her humming loudly.

Humming soon became singing…if you could call that pitchy mess singing. He stood and stretched, hoping to get a peek over the fence, but all he saw was a blonde ponytail bobbing up and down. He made his way around the pool to the corner where the ground was raised for a rocky waterfall feature that flowed back into the pool. He climbed just high enough to see her dancing around, earphones in.

She shook her ass and swung her head around to what sounded like a terrible rendition of a 90’s Pop chart-topper. Jules grabbed what looked like the last red geranium from a flat of flowers on her outdoor table and a garden spade, each taking a turn as her microphone as she shimmied her shoulders. She planted the flower in a nearby pot and tamped down the dirt while hunched over.

That’s when her ass began to swing from side to side. It was also when his dick began to twitch. Who would’ve thought gardening could be so hot? And that was just the beginning.

It turned into full porno-stripper mode when she got hot and pulled her shirt over her head with nothing but a skimpy something or other underneath — bikini, sports bra, regular bra — he didn’t keep up with women’s fashion, he just knew it was fucking hot. Especially with those tiny shorts of hers — the shorts currently sliding down her perfectly toned, tan legs.

Bikini. It was a boner pleasing bikini. Under all that hard, bossy exterior, there was a sexy beast waiting to get out. Oh, what he would have given to tame that sexy beast and smack her perfect ass for shits and giggles.

Jules dipped her toe into her pool, testing the water. A swim was just what she needed — if you asked him — not that anyone had. An image of Jules pulling herself from the water and taking one step at a time as she climbed out, the water dripping from her glistening body, ran through his head. All in slow motion, of course.

“Hey, jackass. The fence is there for a reason.”

Shit. He was caught. He was pulled from his dirty thoughts so quickly, it threw him off. He lost his footing and slipped on the wet rocks, sliding down the waterfall, right into the pool. Laughter was all that could be heard from over the fence — and from his patio. He now had an audience. What he didn’t expect was the bomb Jules had been saving for days since their last encounter. She yelled, “Heads,” just before a two-foot-tall juniper flew over the fence and landed in his pool. Stephanie St. Klaire is a Pacific Northwest native currently living in Portland, Oregon with her husband, five children, and two ferocious lap dogs that are used to the finer things in life like sleeping all day. When she isn’t writing, she can usually be found with a plate full of taco’s, a side of bean dip, and probably some gummy bears while being a little bit hippy and a lot bit busy mom’ing and wife’ing.

When she’s not tossing around gritty crime show inspired serial killers and diabolical bad guys, she likes to make people pee their pants a little with a good romcom. Sometimes, her worlds collide, and she writes really funny stuff right before she kills people off on the pages! She loves murder and mayhem as much as a good laugh and HEA! That’s why she’s a die-hard Hallmark junky but loves her gritty crime shows – balance!

Stephanie has always been a story teller, with the gift of “gab”, and a life-long goal to be a writer. Unfortunate circumstances with her health, finally afforded her the time to do so. Irony at its best, she began writing her first novel at an adverse time, to escape her circumstance and explore the stories in her imagination for relief. She is happy to share those stories with her readers, and bring a little fun, entertainment, and of course smexy characters to the pages.

Posted by Friend till the end book blog at 8:15 AM